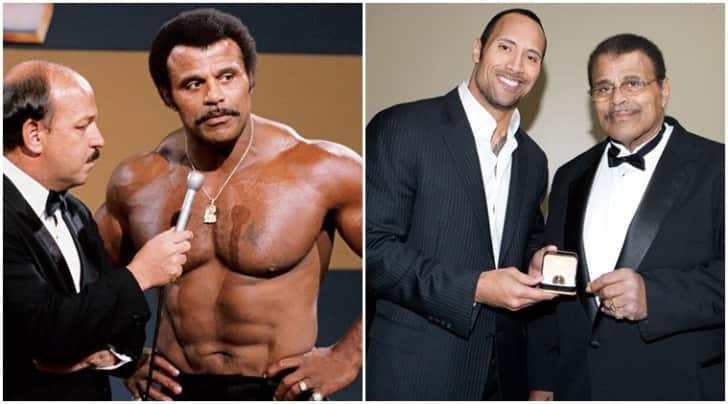 Rocky Johnson was inducted by his own son into the WWE Hall of Fame in 2008.

The Canadian professional wrestling legend Johnson’s sports-entertainment career began in the mid-1960s when he made a memorable impression in the National Wrestling Alliance. However, it was during his WWE tenure in 1983 that Rocky Johnson achieved fame and success.

Johnson leaves behind several memorable rivalries with the likes of Greg ‘The Hammer’ Valentine, Don Muraco and Adrian Adonis. He found his greatest success when he teamed up with Tony Atlas as The Soul Patrol. The two men became the first African-American World Tag Team Champions in WWE history when they defeated The Wild Samoans in 1983.

Saddened to hear about the passing of Rocky Johnson. Rocky was always extremely friendly & kind to me every time I interacted with him over the years. My condolences & thoughts go out to his family.

I am so sorry to hear of the passing of the great Rocky Johnson. Always a gentleman, I always enjoyed talking with him. My deepest condolences to his family, friends, and the fans who loved him. A very sad day for wrestling.#RIPRockyJohnson pic.twitter.com/4agKbOzAry

One of the men I looked up to and one of the best to ever do it. God rest his soul. #RIPRockyJohnson pic.twitter.com/VaTD5NsnjP

After retiring in 1991, Johnson trained his son, Dwayne, who went on to become one of the biggest stars in the history of sports-entertainment and carried on his father’s legacy with pride. The Rock further built a career in acting and is one of Hollywood’s successful actors now.

Rocky Johnson achieved the highest honor in sports-entertainment when he was inducted by his own son into the WWE Hall of Fame in 2008.

For all the latest Sports News, download Indian Express App